The Highbridge Pool and Recreation Center were built in 1936. The pool was the fifth of eleven city pools built with labor supplied by President Franklin D. Roosevelt’s Works Progress Administration (WPA). It opened during the hot summer of 1936, leading Fortune magazine to dub 1936 “the swimming pool year.” 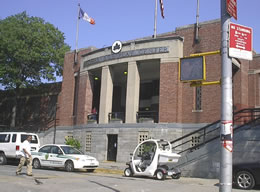 An avid swimmer since his college days as a freestyler at Yale, Parks Commissioner Robert Moses (1888-1981, Parks Commissioner 1934-60) created many facilities that increased public access to New York’s water resources. Moses began a flurry of pool construction when he became New York City Parks Commissioner in 1934. Highbridge Pool opened July 14, 1936, with great fanfare; Moses and Mayor Fiorello LaGuardia (1882-1947) both attended the opening, and after the Mayor turned on a switch lighting the pool, a swimming and diving exhibition ensued. When it opened, the pool’s hours were 10 a.m. to 10:30 p.m., and admission to the pool was 20 cents for adults and 10 cents for children.

Moses implemented many innovations to make the pools cleaner and more accessible to the public, including improved filtering systems and underwater lighting. He was able to build so many in part because, during the Depression, the Federal government was funding public works projects as a means of providing people with jobs. Moses and Mayor LaGuardia were able to secure a great deal of WPA funding for New York City, in part because its projects were so well organized. After the WPA disbanded in 1943, Moses continued to build pools, providing overheated New Yorkers with a place to swim, wade, or just beat the summer heat.

The High Bridge, for which the park, pool, and the center are named, was built in 1848 to carry the Old Croton Aqueduct over the Harlem River. Begun in 1837, High Bridge was once part of the first reliable and uninterrupted water supply system in New York City, the Old Croton Aqueduct. It was one of the first of its kind constructed in the United States. The innovative system ran 41 miles into New York City through an enclosed masonry structure crossing ridges, valleys, and rivers. The High Bridge soars 138 feet above the 620 foot-wide Harlem River, with a total length of 1,450 feet.

Highbridge Park, located at 175th Street and Amsterdam Avenue, was assembled piecemeal between 1867 and the 1960s, with the bulk being acquired through condemnation from 1895 to 1901. The cliffside area from West 181st Street to Dyckman Street was acquired in 1902, and the parcel including Fort George Hill was acquired in 1928. In 1934 the Department of Parks obtained the majestic Highbridge Tower (1872) and the site of old High Bridge Reservoir. The recreation center and pool were built on the site of the old reservoir.

Parks’s Monuments Shop has been located for decades underneath the pool complex, which was renovated in 1985 following a three-year, $9.1 million project. The 165-foot by 228-foot pool was made handicap accessible, the main pool building, concessions building, and filter building were repaired, and new heating, ventilation, electrical and filtration systems. Mayor Giuliani funded a $305,000 renovation of the pool’s filtration system in 1996 and Council Member Guillermo Linares funded a $445,000 upgrade of the pool’s heating and ventilation systems. In 2001 Council Members Linares and Stanley E. Michels and Borough President C. Virginia Fields funded a nearly $1 million renovation of the recreation center that added volleyball and basketball courts, ensuring that the facility will continue to serve New Yorkers for many years to come.