John James Audubon is best noted as a naturalist and an artist of life-size paintings of birds. Born in Haiti on April 26, 1785, Audubon had given several accounts of his birth, but records discovered in the early part of the 20th century established the fact that he was the son of a French naval captain and a French girl (Creole) who worked on the plantation of Captain Audubon in San Domingo (Haiti).

Audubon was educated in France and came to the United States in 1803. While he was living in Philadelphia, Audubon became an apprentice clerk. He met Lucy Bakewell and married her in 1808.

For the next 12 years, the Audubon’s lived in Kentucky. Audubon frequently changed his occupation and neglected his business to carry on his observations and study of birds which lasted from 1808 to 1826. This nearly forced him into financial ruin. During this period he became a member of the Lyceum of Natural History.

In 1826 Audubon went to Great Britain to search for a publisher and subscribers for his drawings, to which he had received a favorable response in London and Edinburgh. The following year Audubon published The Birds of America.

A decade later (1836), Audubon settled in New York City with his family and lived at 86 White Street. Audubon purchased the property in northern Manhattan from the proceeds of his books in 1839. The 24-acre property extended from 153rd Street to 160th Street and from the Hudson River to what is now Amsterdam Avenue. The property became known as “Minniesland,” which was named in honor of his wife’s nickname and was also the Scottish name for “mother.” Audubon’s sons, Victor and John Woodhouse built homes near their parents’ estate on the shore of the Hudson River. 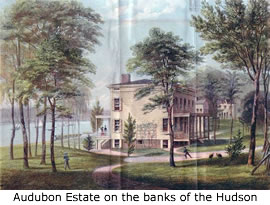 During the next few years, things became rather busy for the naturalist. In 1841 Audubon was granted permission by the city to shoot rats on the battery at dawn. This resulted in the conception of a new book published in 1845, Viviparous Quadrupeds of North America. This book was accomplished with the help of his son Victor.

In 1843, Trinity Church needed property north of the city for a planned cemetery and purchased part of Audubon’s estate for such a purpose. The site of the cemetery would be bounded by Riverside Drive, Amsterdam Avenue, 153rd Street and 155th Street.

Samuel F. B. Morse, the noted inventor of the telegraph, was a guest at the Audubon home. He had, in 1843, erected a mast for a telegraph wire to span the Hudson River for the first messages to New Jersey from New York. The first telegraphic message from Philadelphia was received by Morse at the Audubon estate.

Audubon had several animals on his property that he enjoyed to watch and care for. Migratory birds such as hawks, crows and owls made their homes in many of the trees. There were caged otters, martens and muskrats as well. One of the things that gave Audubon some local fame and notoriety with his neighbors was the fact that he caught a 200-pound sturgeon from the shore of the Hudson.

Over the next few years, Audubon’s health started to fail. He spent a great deal of time with his family taking long walks and singing French songs with his grandchildren. One of the things that Audubon had done was to walk by a brook on his property. This brook was located near what is now 157th Street and Broadway. Many times he walked with his devoted wife who never left his side. 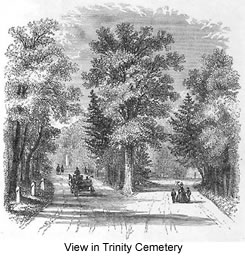 Audubon died on January 27, 1851, and was laid to rest in a spot that he had selected in Trinity Cemetery. The gravesite is located behind the Church of the Intercession. The New York Academy of Sciences erected a 16-foot memorial to honor Audubon in 1893 with the help of subscriptions. In a fitting tribute to Audubon, both sides of the memorial have likenesses of his work topped with a Celtic cross.

The New York Historical Society purchased 430 of the 433 original watercolors from The Birds of America from Lucy Audubon in 1863. The total cost was $4,000.

In 1941 developers purchased the properties of the estate of Audubon and his sons as well as that of a neighbor, William Wheelock (1825-1905), which were to be razed for urban development. Wheelock’s home was constructed in 1860. Unfortunately, there is no indication of the site’s historical significance.

The Audubon Museum Complex which is bounded by Broadway, Riverside Drive, 155th and 156th Streets was named in honor of Washington Heights’ resident naturalist. This complex houses some of the nation’s most distinguished museums and societies. The site was conceived and developed by railroad magnate Archer Milton Huntington (1870-1955). These institutions originally included The American Indian Museum, The American Geographical Society, The Hispanic Society of America, The American Numismatic Society, The American Academy of Arts and Letters and the Church of Our Lady of Esperanza.

Unfortunately, some of these institutions have left the site. The American Indian Museum was acquired by the Smithsonian Institution and relocated to the Custom House at Bowling Green in lower Manhattan. The American Geographical Society moved to the midwest. Boricua College, organized in 1973, moved into the building that housed the American Geographical Society. The building where the American Indian Museum used to be was renovated and taken over by the Hispanic Society of America.

For more information visit the National Museum of the American Indian and Trinity Church and Trinity Cemetery. Audubon’s grave can be seen at Findagrave.com. For an evaluation of Audubon’s artwork, visit the National Audubon Society. To view photographs, lithographs and maps of the Audubon estate and its immediate surroundings, and to purchase antique prints of the Audubon collections, visit Minniesland.com.