Overlooking the Harlem River there was an amusement park that Washington Heights and Inwood called its own. The Fort George Amusement Park was opened in 1895 and was located in what is now the northernmost end of Highbridge Park, between 190th and 192nd Streets at Amsterdam Avenue. 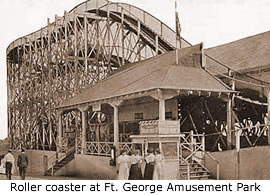 At the time many trolley lines owned property at their terminuses for the specific reason of bringing riders to that spot for recreation. When Fort George opened, there were other amusement parks that competed for the throngs of people looking for thrills and chills that were offered. The nearest amusement park to Fort George was the Palisades Amusement Park in Cliffside Park, New Jersey, which opened in 1898. Other amusement parks in New York were at Coney Island such as Luna Park, Astroland, Dreamland Park and Steeplechase Park.

Fort George Park had many rides open to the public. The Ferris Wheel and Toboggan Slide were two of its attractions. There were two music halls: the Trocadero at the south end (about 190th Street) and the Star at the north (at 192nd Street). The Fort George Scenic Railroad was one of the rides offered, giving a spectacular view of the area.

Fort George had plenty of places to eat, drink and rest. There was a restaurant with an ice cream parlor. The Fort George Hotel and Casino had a place to stay for those who wished to spend the night in the area. Another one of the features of the amusement park was a skating rink used during the winter months.

Some of the concessions were operated by Nicholas and Joseph Schenck, who initially came to the park as paying customers. While there, Nick and Joe realized that there was a potential source of income at Fort George.

They opened a beer concession at what was known as the Old Barrel. It was 15 feet in diameter and 25 feet long. In time they expanded their efforts to include vaudeville acts at the park.

One of the regulars who visited the Fort George Amusement Park was entrepreneur Marcus Loew. Loew was owner of various penny arcades, nickelodeon parlors and several theaters. The Schenck brothers befriended Loew during his visits. In time the brothers borrowed money from Loew to establish several rides, and these became known as Paradise Park. In time Loew would become famous for opening a chain of movie theaters that would bear his name.

One of these rides was the Toboggan Slide in which the people boarded it from the top, usually from the cliffs. After it burned down, it was removed and reconstructed at Palisades and became the Big Scenic Coaster. At Palisades, the coaster was built in reverse because the people entered it on the ground.

The Palisades Amusement Park was purchased by the Schencks in 1910, who made massive improvements during their tenure as owners. By 1935 they sold their interests in Palisades and went to California to be a part of the growing film industry that started in Fort Lee, New Jersey.

Power for the amusement park had been supplied by the United Electric Light and Power Company, which was organized in 1887 by the Westinghouse Power and Electric Company as a competitor to the Edison Electric Company. Its chief goal was to provide alternating current as opposed to Edison’s direct current facilities. In 1904, United Electric built a power station to provide electricity to northern Manhattan. In time the plant was taken over by Con Edison and served northern Manhattan until the 1970s, when it was closed down. In 1997 the structure was razed to improve and expand space for Highbridge Park.

In 1914, Fort George Park closed as a result of a massive fire. The land was incorporated into Highbridge Park and now is used for seating and strolling. This section of the park is very quiet compared to the nearby ballfields. Guard rails and large planters were installed in the area to ensure that abandoned cars would not be left there or that other cars could be driven in. The New York City Department of Parks and Recreation has recently cleaned up the area and has cleared the area of dense overgrowth and dead trees to improve visibility.

Washington Heights and Inwood has lost a valuable community treasure and should be reminded of its past. Unfortunately, there are no markers or plaques to honor Fort George Amusement Park or the people such as Nicholas and Joseph Schenck and Marcus Loew who were involved in the park and went onto bigger and better things.

For further information on tours of Highbridge Park, call the Urban Park Rangers at (212) 304-2365. The New York City Department of Parks and Recreation has a Web site. There are also various community groups involved with the park as well: the Friends of the Harlem River Speedway Esplanade, which can be reached at (212) 942-6910, and the Friends of Highbridge Park, which can be reached at (212) 645-0576.