Highbridge Park derives its name from New York City’s oldest standing bridge, the High Bridge (1848), which was built to carry the Old Croton Aqueduct over the Harlem River. From the 17th to the 19th centuries, the area was sparsely populated with scattered farms and private estates. During the American Revolution, the Battle of Fort Washington took place in the vicinity. General George Washington used the Morris-Jumel Mansion, adjacent to the southern end of the park near Edgecombe Avenue and West 160th Street, as his headquarters in September and October of 1776. 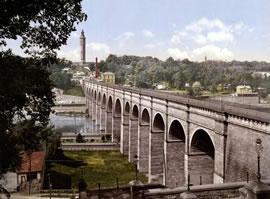 The High Bridge was once part of the first reliable and uninterrupted water supply system in New York City. As the City was devastated by fire and disease in 1830s, the inadequacy of the water system of wells-and-cisterns became apparent. Numerous corrective measures were examined. In the final analysis only the Croton River, located in northern Westchester County was found to be sufficient in quantity and quality to serve the needs of the City. The delivery system was begun in 1837, and was completed in 1848.

The Old Croton Aqueduct was the first of its kind ever constructed in the United States. The innovative system used a gravity feed, running 41 miles into New York City through an enclosed masonry structure crossing ridges, valleys, and rivers. The High Bridge soars 138 feet above the 620 foot-wide Harlem River, with a total length of 1,450 feet. The bridge was designed with a pedestrian walkway atop the Aqueduct and was not used for vehicular traffic. In the 1920s the bridge’s center masonry arches were declared a hazard to navigation and replaced by a single steel span.

The area that is today’s Highbridge Park was assembled piecemeal between 1867 and the 1960s, with the bulk being acquired through condemnation from 1895 to 1901. The cliffside area from West 181st Street to Dyckman Street was acquired in 1902, and the parcel including Fort George Hill was acquired in 1928. In 1934 the Department of Parks obtained the majestic Highbridge Tower and the site of old High Bridge Reservoir.

One of Manhattan’s most picturesque landmarks, the water tower has looked over old High Bridge and the Harlem River valley since 1872. In 1958 the tower was rehabilitated and outfitted with a five-octave carillon in memory of Benjamin Altman. The Highbridge Recreation Center and Pool were erected on the site of the former reservoir in 1936. The facility at Highbridge Park was one of eleven city pools built with labor supplied by the Works Progress Association and opened during the hot summer of 1936. The High Bridge and surrounding land came under Parks jurisdiction in 1960.

In addition to the High Bridge, water tower, and recreation center, Highbridge Park boasts important natural assets including open vistas and an unusual geologic makeup. Among its strongest features are the magnificent cliffs and large rock outcroppings that dominate the park. Today, community groups such as the Friends of Highbridge Park and the New York Restoration Project work in conjunction with the Urban Park Rangers to improve the park for everyone.

I’ve never been clear on what the mechanical function of the tower was back when High Bridge was still in use as an aqueduct. Would also like to know the current rationale for barring pedestrian access to the bridge, and whether that might change.

I went on the water tower tour a few months ago, and the Urban Park Ranger giving the tour explained that the reservoir in Highbridge Park receiving the water from the aqueduct (where the swimming pool is now located) was not high enough to be able to provide water to some parts of Washington Heights that were at a higher altitude than the reservoir. The tower was built to artificially increase the water pressure to be able to provide water to these areas. Inside the water tower there was a tank. Water would be pumped up to the tank through a narrow pipe, and then the water would shoot down a wider pipe through gravity. The increased pressure thus obtained would be enough to feed the high-altitude areas of Washington Heights. It was an ingenious mechanism to counteract gravity.

About why it was closed to pedestrians, apparently, in the 1970s, a kid threw a rock from the bridge and killed a tourist on a Circle Line boat. There are plans to reopen the bridge to pedestrian traffic sometime in the next couple of years. They’re planning to put protective fencing to prevent a similar tragedy in the future.

it’s worth noting that the Altman carillon was destroyed in a fire in 1984. the park department replaced the roof but not the bells. wouldn’t it be nice to have them back?

If one wants to walk/jog from the Highbridge Park water tower in Manhattan to the Highbridge Park in the Bronx, proceed north on Amsterdam Ave. to 181st Street, then turn right and walk across the Washington (not the G. Washington) Bridge, with excellent views south over the Harlem River. At the end of the bridge turn right on University Ave. past the Seminary near 170th street, There is an interesting interpretive sign at this small Highbridge Park, and great views of Manhattan. The setting, with the corroded cast iron lamp posts and eroded walkways, hints of the times passed, when New Yorkers could promenade across the Highbridge between Manhattan and the Bronx. Serious studies are underway to reopen the promenade. This will doubtless occur, but may take another 10 years.