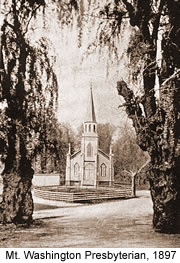 The church was established in 1844 by Samuel Thomson (1784-1850), a resident of Inwood. Thomson, a native of Maryland of Scotch Irish descent and a devout Presbyterian, came to New York in 1804. Three years later he married Ann Strean. The Thomsons had ten children, some of whom went into the ministry and others went into business. Between 1835 and 1840, the Thomsons moved to the Tubby Hook section of Inwood, which is located west of Broadway and along Dyckman Street.

The first church was originally located on the northwest corner of Kingsbridge Road and Inwood Street (now Broadway and Dyckman Street) on the property of Samuel Thomson. The church opened for worship on August 18, 1844. It was the first church located in Inwood because those who went to church either went to the Bronx or to southern parts of Manhattan. Mount Washington was organized as a Presbyterian Church on October 18, 1846. The church had a grass lot in front with two willow trees that had given the church a framed view from the street. The land was later deeded to the church by the heirs of Mr. Thomson and then was enlarged in 1856.

Reverend Payson was born in Harpersfield, New York, and was the youngest of six children, all of whom served in the ministry. Payson went to Yale and graduated in 1866. Six years later he graduated from Union Theological Seminary. He was ordained as Pastor of Mount Washington on June 26, 1874. Payson lived on Prescott Street at the corner of Bolton Road with his sister Amelia S. Payson. He married Sara Armour of Liverpool, a member of the Church, in 1883 and took up residence at the Parsonage.

Isaac Michael Dyckman and his wife Fannie had a vested interest in the church because it was located not far from the house that was owned by the family for over 330 years. Dyckman was a deacon of the Church from 1859 to 1899. His daughters, Fannie Dyckman Welch and Alice Mary Dyckman Dean, were involved in the purchase of the old Dyckman farmhouse on Broadway and 204th Street in 1915 and gave it to New York City as a museum. Dyckman Street was named for the this illustrious family.

Other families who were church members had been also active in the community, such as the Cummings, Knapps, Perkins, Ishams, Vermilyes and Prescotts, and have streets named to honor their contributions not only to Inwood but to the Church too. Prescott Street was renamed for Reverend Payson in 1921. Presently, on the corner of Payson and Dyckman Streets is a playground known as the Reverend George S. Payson Playground, which was built in 1939 under the administration of Parks Commissioner Robert Moses. The playground is situated near the site of the original church and the home of Reverend Payson. The New York City Department of Parks and Recreation is working to have a historical sign placed there, giving a biographical and historical story of Reverend Payson.

Clara L. Flitner and her family were members of Mount Washington too. Ms. Flitner’s claim to fame was that she was the Head Librarian for the Dyckman Institute, located within Inwood Hill Park about 400 feet west of the intersection of Payson Avenue and Beak Street (coincidentally named for Cornelia, Elizabeth and Albert Beak, who lived in the area and joined the Church in 1860). William H. Flitner and Charles Flitner were Church Elders spanning a service to the Church from 1900 to 1927.

The Dyckman Institute was organized on April 18, 1818, by the New York State Legislature as the Hamilton Free School at the urging of Elizabeth Schuyler Hamilton, the widow of Alexander Hamilton. The School was originally located on Broadway between 187th and 188th Streets. In 1861 the organization was reorganized to become the Dyckman Institute and Library, with Clara Flitner as Head Librarian. In 1943 the Institute closed and all of its assets were absorbed into Columbia University’s scholarship funds. The Dyckman Scholarships were formally redefined in 1986 to give High School students from the Washington Heights and Inwood communities the opportunity to attend Columbia University.

The church was home to various community organizations in the 19th Century, two of which were the Busy Bees and the Willing Workers Society of Inwood. The Busy Bees was organized in the 1870s as a Sunday School for girls at the home of Miss Grace Perkins, who lived on Broadway near 179th Street. This group had been used to help those in need and for the infirmed. The Willing Workers of Inwood was founded in 1882 by Mrs. Mary Jeffrey who, with her husband William, had joined the Church that year. The Society was philanthropic and had merged with the Bees. One of its 40 charter members was Mary Alice Dyckman Dean. In 1928 the Society generously furnished a stained glass window to the Church, and a memorial tablet has a place of honor in the entrance hall of the Sanctuary.

The present structure of the church is located at 84 Vermilyea Avenue between 204th and Academy Streets. This relocation was the result of the condemnation of the original church and property in 1927. The new Independent “A” train was to run in that area as well as new housing for the area. The Independent Line opened in 1931.

The ground was broken for the Church on June 23, 1928, and the structure was completed in the summer of 1929. The last service was held in the old church on June 16, 1929, and the first services in the new building were held in September 1929. The Parish house was built on the present site in 1914. The Church owned the property north to the corner of Vermilyea and 204th Street. Part of the property was sold, and the Inwood Post Office that opened in 1935 is on the corner of 204th Street and Vermilyea Avenue.

As one enters the Sanctuary from the street, there are plaques honoring former members of the Church who held high positions, such as deacon, ruling elder, treasurer, etc. Such names as Payson, Dyckman, Thomson, and Cardell grace the walls of the entrance.

For information on the church and its activities call (212) 567-0442. Reverend Lydia Miranda is the Pastor of the church. Services are held on Sundays at 11:00 AM. For more information, visit the Web sites of the Presbyterian Churches and the Parks Department.

Nice job on the history. The correct spelling for the individual whom the daycare center was named after is Cardell. (Posted by Bill McIntosh on September 27, 2003 11:13 PM.)

Thank you for presenting the article on the Mount Washington Presbyterian Church. However, there are some factual inaccuracies in the piece with regard to the Dyckman Library and Hamilton Free School. The Dyckman Institute was not founded in 1818. The Hamilton Free School was founded in 1818 to provide an education for, in Alexander Hamilton’s widow, Eliza’s words, “the poor near fort Washington on the upper part of this island.” Eliza Hamilton donated the building and land for the School. It was originally located on Broadway and 187th Street. In 1853 the school building burnt down and there no longer be any need for such a school, the Dyckman Library was established. Later, with the creation of the Inwood Branch of the New York Public Library, the Dyckman Library in the early 1920s became the Dyckman Institute. The Institute operated both a museum in Inwood Hill Park devoted to local archaeology and a publishing house. Finally, to apply for the Dyckman Institute Scholarship, students should contact the Columbia College Admissions Office at (212) 854-2522 or via their website: http://www.studentaffairs.columbia.edu/admissions/. The recipients of the scholarship for the 2003-2004 academic year were Freshman Brenda Cepeda and Juniors Alexandra Hernandez and Katherine Paez. (Posted by Bob Isaac on March 5, 2004 02:52 PM.)