The Hudson-Fulton Celebration was organized to commemorate two events in 1909. First was the Tri-Centennial of Henry Hudson’s voyage up the river that bears his name and the maiden voyage of the Claremont in 1807. 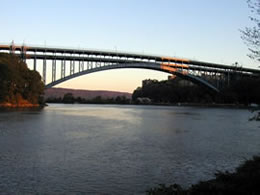 Scientific American Magazine had published a design for the proposed bridge in 1906. A bridge was to have been constructed and opened in 1909 and would connect Manhattan and the Bronx at Spuyten Duyvil where the Harlem River Ship Canal meets the Hudson River. The bridge would be located near a cove in the Spuyten Duyvil Creek where a reputed landing site of one of the longboats of Hudson’s ship, the Half Moon, had landed to trade with local Indians. The idea was occasionally revived over the years, keeping the project current.

In 1935 a reporter visited the Spuyten Duyvil section of the Bronx and wrote that it was a quaint English village in the midst of a big city complete with four ivy-covered fieldstone churches. The community had a small country lane called the Spuyten Duyvil Speedway, which was a two-way road that was bordered with trees thirty feet tall. The reporter mentioned the fact that this bucolic part of the Bronx was to be ripped apart for the new bridge connecting it with Manhattan.

When the original plans were drawn up for the bridge, it would have had the following statistics: 2,870 feet long, 80 feet wide, 270 feet high, a central span of 270 feet between the towers with a boulevard like roadway, 2 pedestrian walkways each 15 feet wide, and on the lower level there would be 4 rapid transit rail tracks. According to the original estimates, it would have cost $4 million and would have taken 4 years to build.

This plan was abandoned in favor of the present structure. Under the direction of Parks Commissioner Robert Moses, the present bridge design was completed and opened on December 12, 1936, at a cost of $2 million. At the time it was the largest plate girder, fixed-arch bridge in the United States.

The bridge was initially designed as a one-deck, four-laned bridge with traffic going both ways. The lower level of the bridge was added and opened in July 1938 to allow for increased traffic demands. This allowed the traffic on the upper level to go to the Bronx and the lower level to Manhattan.

The bridge was denounced by Bronx residents and civic groups. They feared that the Spuyten Duyvil would be destroyed as a residential area and despoil its dreamy isolation. It was also feared that the bridge would bisect the natural beauty of Inwood Hill Park.

The Henry Hudson Bridge was built in conjunction with a project developed by Commissioner Moses known as the West Side Improvement, which connected the bridge with midtown Manhattan by means of the Henry Hudson Parkway and the West Side Highway, which opened on December 14, 1937. Commissioner Robert Moses insisted on a route that allowed him to get parkland and labor for free. Construction workers were provided by the WPA and CWA.

The present structure is 2,000 feet long and is 142.5 feet high at the center of the span. Emil Praeger, chief engineer, and Clinton F. Loyd, chief architect, of the firm Madigan-Hyland designed the structure.

The West Side Highway was built in Riverside Park by the shore of the Hudson River up to 145th Street. From there the Henry Hudson Parkway continued this route to ensure that Inwood Hill Park’s pristine woodland would not be destroyed.

The opening ceremony for the bridge was held on December 12, 1936. This ceremony was given simultaneously with a birthday party for Mayor Fiorello LaGuardia by Parks Commissioner Robert Moses. From all accounts it was not one of the better productions created by Moses.

After the ceremony began a sudden rainstorm that forced the celebration to move into the Administration Building at the toll plaza of the bridge on the Manhattan side. The fierce wind gusts kept opening the windows of the building during the storm.

Oddly enough, the ceremony was held on the same day that King Edward VIII gave his abdication speech. Mayor LaGuardia mentioned that he would interrupt the ceremony to listen to the rebroadcast of the speech. This incident infuriated Moses who in turn forced LaGuardia to continue with the ceremony, forcing the Mayor to miss the speech.

Many in the city were not sure there would be enough traffic for the newly opened bridge. On the first day of operation (Monday, December 12, 1936) only 9,086 vehicles crossed the bridge. The first weekend of traffic broke the 10,000 vehicle mark. On December 20th, 15,644 vehicles crossed.

Today the bridge acts as an attractive gateway to the Spuyten Duyvil and Harlem River Ship Canal. As a result of the construction of the bridge, the real estate boom came to the Riverdale section of the Bronx.

For more information on the Henry Hudson Bridge and other facilities of the MTA Bridges and Tunnels, visit the MTA’s Web site. To listen to the abdication speech of King Edward VIII, visit the History Channel.