New York City sits atop a foundation composed of five distinct layers of bedrock: Fordham gneiss, found primarily in the Bronx; Manhattan schist, in Lower and northern Manhattan; the Hartland Formation, in central Manhattan, the Bronx, Brooklyn, and Queens; Staten Island serpentinite, in Staten Island; and Inwood marble, in Manhattan and beneath the rivers that surround it. Of these layers, Inwood marble is perhaps the most aesthetically distinctive with its pure, crystalline white appearance. A lovely, worn outcropping of Inwood marble can be seen in Isham Park. 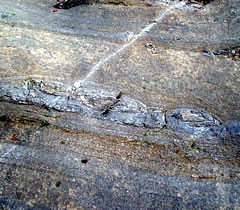 Inwood marble, named for the northern Manhattan neighborhood in which it is most visible at the surface, came into being about 450 million years ago. At that time, the continents of the world existed as a single supercontinent, called Pangea. The continents and oceans are not anchored down in a fixed position — they rest on landmasses called tectonic plates, which in turn float on the earth’s molten core. These plates shift continuously, colliding and separating, causing earthquakes and volcanic eruptions, often forming mountain ranges with rocky peaks. It was during the coalescence of continents into Pangea that the east coast of North America collided with a string of volcanic islands, and Inwood marble was formed. Inwood marble was originally composed of limestone and dolomite, minerals that had accumulated over the underlying gneiss foundation. When the two plates collided, the limestone and dolomite were crushed under the intense heat and pressure, forming a white, metamorphic marble.

Inwood marble, being much softer than schist and gneiss, is easily eroded, particularly by acid rain. Marble’s softness is responsible for much of New York City’s geography. Veins of marble once connected Manhattan to the mainland. Over time, the marble washed away, creating pathways for the Hudson, Harlem, and East Rivers around the newly formed island of Manhattan. Marble is now rarely found above ground, although some spectacular examples can be seen in Isham Park, especially here at the corner of Isham Street and Seaman Avenue. Below ground, however, miners and subway workers often find themselves surrounded by the dazzling, white rock.

There is an exposed seam of Inwood Marble at excavation for an apartment house on Marble Hill Ave. in Marble Hill, 1/2 block north of the Spuyten Duyvil Canal. It is just west of Broadway, and can be seen from the southbound Broadway Local as it leaves the 225 St. station, or from the construction fence erected on Marble Hill Ave. I picked up a small sample from the site and it is just as described in the website report, maybe even a bit more crumbly than expected. If you want to see a bit of geologic history before they pour the foundation for the new building, hurry to the site. At present they are still loading dump trucks with the dirt and marble from the site. There is a very good historical paper on the web by a mineralogist named Lawrence Conklin, about the history of the site as a marble quarry from the late colonial period. A Google search will turn up the paper in the first page or two of search results. It is illustrated and goes into great detail about local history. Pretty interesting if you are a neighborhood history nut. Happy hunting.