In 1930, the Loew’s 175th at 4140 Broadway opened its doors to the public. This theater culminated the RKO Coliseum’s (located at 181st Street and Broadway) brag of being the third largest in America with an added 100 seats with a capacity of 3,600 seats. 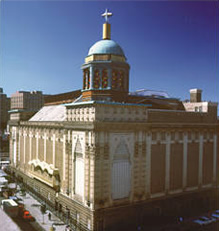 This Loew’s 175th was part of a movie theater chain founded by Marcus Loew (1870-1927). In 1912 Loew owned 400 cinemas in the United States. He purchased the Metro Movie Studio in 1920 and became co-founder of the MGM Studios. Loew also went into partnership with Adolph Zuckor to run penny arcade shops.

The exterior facades were decorated in terra-cotta with hints of Art Deco, Egyptian, Aztec, Mayan, Moorish, Oriental and Persian Design. It had also cast a spell on the mysterious which still interests people today.

The building was constructed by Thomas W. Lamb. The entrance and interiors were designed by the Rambusch Studios. The Loew’s 175th offered a form of escapism with the spire and loftiness of the building. Lamb and the Rambusch Studios were involved with the construction and design of the Audubon Ballroom on Broadway and 165th Street. The theater was one of the many stops in Manhattan on the 25th Anniversary of the League of Historic American Theaters.

On Broadway were various restaurants and stores. One of these establishments was Spritzer’s, which offered German cuisine. It had served the community until the early 1960s.

Some of the earliest vaudeville shows included comedy stars Shaw and Lee from the Capitol Theater. Crazy Otto, who was the organ player, who had become known at the theater. One of the earliest movies, with Norma Shearer (1902-1983), called “Their Own Desire” was shown there. Ms. Shearer was nominated for Best Actress for the movie in 1930.

The Loew’s 175th closed in 1967. Two years later the property was purchased by Reverend Frederick Eikerenkoetter (better known as Reverend Ike) and it became the United Church-Science for Living Institute. His services start at 2:45 PM on Sundays.

In the early 1970s Reverend Ike had a television show and became famous for his “Pie in the Sky” ads. He shamelessly pandered for money and was openly proud of what he had spent it on: jewelry, cars and women. He was quoted as saying “The LACK of money is the root of all evil.”

Eventually, Reverend Ike toned down his way of preaching. Part of his sermons include hawking books such as “Fried Chicken for the Soul.” Even so, Reverend Ike preaches in other cities, as his congregation here in New York has dwindled and services are sparcely attended.

Another group that uses the theater is the Heavenly Vision Christian Center. It is an Evangelistic Ministry center preached by Salvador and Kena Sabino. Services are on Sundays at 6:30 PM and they can be reached at (718) 220-8124.

The theater is also used for live shows. These are mostly for the Latino community at large and can be quite extravagant.

For more information on Reverend Ike, visit his Web site. Visit also the League of Historic American Theaters and the Loews Cineplex Organization.