After eight years of hostilities, the Treaty of Paris was initially agreed upon by British and American representatives on January 20, 1783. This treaty officially heralded the end of the American Revolution.

From the beginning of the war, King George III had wanted to end the hostilities as soon as possible. As the Revolution was progressing to its ultimate conclusion, the Foreign Office in London had to make a decision. This was to continue the war in America and hold New York City, or maintain a strong presence in the other British colonies, such as India and Canada. It was also increasingly clear that keeping the American colonies was a losing proposition to His Majesty’s government, and peace between the United States and Great Britain was inevitable.

On April 11, 1783, the announcement of the cessation of hostilities between Great Britain and her former colonies in America had been established. A week later, general orders were issued by General Washington, which announced, “The cessation of hostilities between the United States of America and the King of Great Britain.” Although the treaty had not been officially signed, the armistice “opens the prospect of a more splendid scene.”

A final detail of the treaty was cleared up, and the treaty was signed on September 3, 1783. Congress ratified the treaty on December 13th. The Royalist occupation of New York City came to an end with the conclusion of the American Revolution.

The last major battle of the American Revolution was at Yorktown, Virginia, on October 25, 1781. The end result of the Battle of Yorktown and the surrender of General Cornwallis had broken the resolve of the British troops and the Loyalists who had held New York since 1776.

With the battle over, Washington withdrew his forces to Newburgh, New York, to protect the Hudson Highlands and to regroup his soldiers during the winter of 1781-82. It was also a defensive posture for the American army, since they were so close to British-held New York City.

This created two difficult tasks for General Guy Carleton, the British military commander of New York for the British forces. First was the need to organize an evacuation of all British military forces and Loyalists who wished to leave, and second was the transfer of power from Royalist to Rebel control of the city. During the transfer, Americans held in jails and on the prison ships in the harbor were to be freed.

The British and Hessian forces were ordered to withdraw from New York on November 25, 1783. As the retreating armies relinquished control of northern Manhattan, the American army advanced toward the city at a respectable distance behind the Royalist army (about an hour apart). General Washington along with General George Clinton (who served as Governor of the State of New York from 1777 to 1795) marched to Manhattan through what is now Washington Heights and Inwood. While in the area, Washington and Clinton stopped at the Blue Bell Tavern, which was located at what is now 181st Street and Broadway. Both men were on their horses with the army passing in review as they marched southward to McGown’s Pass and lower Manhattan. 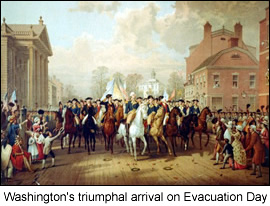 Washington returned to take possession of the forts that had been abandoned seven years prior. This repossession meant so much for the cause of freedom after the bitter blow to the Rebels in 1776. The repossession of Fort Washington strengthened the resolve of the victorious Americans. The password of the day was “PEACE.”

In honor of Washington’s entrance to New York, many patriots proudly displayed the American flag. British Provost Marshal William Cunningham, who was notorious for being the commander of the prisons and prison ships in New York City, went throughout the city tearing down the rebel flags while there was still a British presence in the city.

When Cunningham arrived at Day’s Tavern, which is located on what is now 128th Street and Saint Nicholas Avenue, Mrs. Day attacked the British soldier with a broom when Cunningham tried to remove the flag from the premises. Powder from Cunningham’s wig got all over his uniform from being pummeled over the head.

There was an atmosphere of unreality in New York City. Washington and his troops passed half-ruined mansions and earthworks and trenches that dotted the streets, making them impassable. The largest structure in the city, Trinity Church, was a blackened hull.

Trees and orchards were cut down or no longer viable, and the rest of Manhattan was denuded of trees. This had been proven by a reconnaissance party that reported to Washington in 1781. The wells were also dry, and attempts were made by the Hessians to dig wells as deep as 40 feet to obtain water, but to no avail.

The last of the Royalist forces departed from Manhattan at 1 p.m. Within an hour of the British evacuation, the American forces triumphantly returned to a city that had been held under tight control for seven years. One woman recalled that the British were “equipped for show … with their scarlet uniforms,” and the Patriots marched in “ill-clad and weather-beaten … but they were our troops … and my eyes were full.”

At the battery at the lower end of Manhattan, General Knox had the privilege of raising the American flag at Fort George (near what is now Castle Clinton). Unfortunately, the flagpole was heavily greased with the Union Jack on top, which had been one of the last acts of defiance made by the British before they left.

After making several attempts to climb the flagpole by an American sailor by the name of William Van Arsdale, he went to a hardware store and purchased a halyard, saw, cleats, nails, and a hammer and returned with a carpenter. The carpenter proceeded to climb the pole hammering the nails for steps. A pulley and rope were affixed to the top of the pole, and the American flag was raised after the British flag was torn down.

On December 4, 1783, Washington bade farewell to his officers at Fraunces Tavern, located on Queen (now Pearl) Street and Canal (now Broad) Street. Once New York was secured, Washington left the city to return to his commission to Congress, which was now meeting in Annapolis, Maryland, on December 23rd. The ceremony was a tearful one, and after nine years of service, Washington returned home to Mount Vernon on Christmas Eve 1783.

The following day the last British warship sailed from Staten Island. As the ship was passing the point where Fort Wadsworth is presently located, the victorious patriots began jeering at the ship from the shore. The captain became so incensed with the action induced by the former enemy that he ordered one of the ship’s cannons to be fired upon them, thus making it the last shot fired in the Revolution.

In 1783, when the occupation of the Royalist forces ended, the population of New York City had dropped 40 percent to 12,000 people, from 20,000 that had been in the city thirteen years before. In 1784, James Duane was appointed Mayor of New York City by Governor George Clinton to oversee the reconstruction of the city.

After the war, Evacuation Day (November 25th) was celebrated with military parades, patriotic oratories, fireworks, and banquets. The centennial of the day was one of the greatest events ever seen in the city. Statues were unveiled in honor of the event in 1883. One was that of George Washington in front of Federal Hall National Monument on Wall Street. Governor Grover Cleveland was in attendance for the unveiling. Another was that of Nathan Hale in City Hall Park, which was unveiled a decade later for the 110th anniversary of the event.

The Evacuation Day celebration was eventually canceled due to the decline of anti-British sentiment and the onset of the First World War, where the United States and the United Kingdom would become allied in many causes.

(Originally published in the Washington Heights and Inwood Report in March 1997.)