For over a century, baseball fans have followed one team that has become an icon of American sports. In its first twenty seasons as a team, the New York Yankees did not win a league championship and finished second only twice. Since then, the Yankees have dominated the World Series by winning 26 championships. 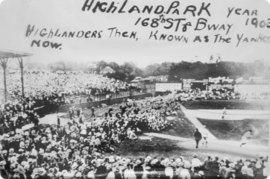 The new name of the team had been changed to the Highlanders (as they were known during their first years in New York and because of the high land that the ballpark was built on). The team’s new owners, William Devery and Frank Farrell, opened the franchise they bought from the American League for $18,000. The club was managed by Clark Griffith and led by Wee Willie Keeler. In the first year of operation in New York, the team finished in fourth place. For the next decade the team stayed at Hilltop Stadium, which was located in what is now Columbia-Presbyterian Medical Center at 168th Street and Broadway.

In December 1902, the American League spent $215,000 to purchase land and begin construction of Hilltop Stadium, which was scheduled to open April 30, 1903. The dimensions of the park from home plate were: left field at 365 feet, the center field at 542 feet, right field at 400 feet and the backstop at 91.5 feet. The ballpark had a seating capacity of 16,000 people. The ballpark drew every type of New York baseball fan, including the carriage trade.

Crowds overflowed the stadium to watch home games of the Highlanders. At times the crowds had to be seated on the field between the foul lines and the seats. The largest attending crowd at the ballpark was on October 10, 1904, at 28,984 paying customers, when the Highlanders played Boston.

The stadium had an excellent view of the Hudson River and the New Jersey Palisades from the upper seats behind home plate. When the park opened, a huge hollow had to be roped off in right field because any balls that were hit into this area were considered doubles. Later on a fence was constructed, and any balls hit over the fence were home runs. In 1913, Hilltop Stadium was destroyed by a massive fire, forcing the Highlanders to relocate and lease space in the Polo Grounds located at 155th Street.

From 1913 to 1922, the Yankees shared the Polo Grounds with the New York Giants. Those people who were unable to pay for tickets to enter the Polo Grounds had a fantastic view of the stadium and the game from a hill called Coogan’s Bluff, located to the west of the ballpark at what is now between Edgecombe Avenue and the Harlem River Drive. They had a free view, albeit distant from the ball park.

The Highlanders were purchased by Colonel Jacob Ruppert and Tillinghast l’Hommedieu Huston in 1914 for $460,000 at the suggestion of John McGraw. Huston was a Spanish-American War hero and made his fortune in Cuba, and eventually bought out his end of the deal. McGraw was the manager of the New York Giants and was known as “Little Napoleon” because of his arrogant, pugnacious and abrasive attitude and short stature. His career came to a quick demise because of his urging Jake Ruppert into the purchase of the Yankees.

The name of the team was changed to the New York Yankees after the acquisition. Frank Chance was the first manager under Ruppert’s reign.

Ruppert, a member of the New York social register and life-long bachelor, served in the House of Representatives from 1890 to 1907, representing New York’s 15th and 16th Districts. He was famous for his brewery and needed a place to sell his Knickerbocker Beer. Ruppert’s brewery was located in the Yorkville section of Manhattan (the Upper East Side), and he became president of the brewery in 1915. He had earned the title of Colonel because of his rank in the New York State’s National Guard 7th Regiment.

Ruppert made player trades with various teams for such greats as outfielder Babe Ruth, pitcher Waite Hoyt and catcher Wally Schang. This was accomplished in 1920 and 1921 with the help of manager Miller Huggins, who was hired in 1917 against the wishes of Huston, who was in Europe at the time. The end result was the winning of the 1921 World Series pennant, the first for the Yankees. In 1922, pitchers “Bullet” Joe Bush and “Sad” Sam Jones, along with infielders Everett Scott and Joe Dugan, were instrumental in the second year that the Yankees won the Series pennant.

In April 1923, Yankee Stadium was opened and the team moved across the Harlem River from the Polo Grounds, thus ending their stay in Manhattan. They had a permanent home in the Bronx on River Avenue and 161st Street. The team went on to win other pennants in the World Series, and many more baseball legends were raised to stardom of baseball fame. During the years that followed, the Yankees attained the name the “Bronx Bombers” because of hitters like Joe DiMaggio. The legendary “Bronx Cheer” or “Raspberry” was also made famous at Yankee Stadium.

When Colonel Ruppert died in 1939 of phlebitis, Edward Barrow was elected president of the team to succeed Ruppert. In January 1945, the Ruppert estate sold the team to LaDan Topping, Dell Webb and Leland “Larry” MacPhail for $2.8 million. MacPhail was installed as president and was given 1/3 of the team and a ten-year contract. Over the years to come, other managers such as Bucky Harris, Casey Stengel, Ralph Houk, Yogi Berra, Billy Martin, Lou Pinella and others managed the club.

CBS purchased the Yankees in the 1960s and named Michael Burke as general manager. In the 1970s, the most recent ownership of the team went to a group of investors with George Steinbrenner at the helm. For a short period of time, Steinbrenner was replaced as head of the Yankees but returned to take control.

On September 30, 1993, a special ceremony took place on the garden of Columbia-Presbyterian Medical Center. This event marked the 90th anniversary of the establishment of the American League’s beachhead in New York City. A distinctive plaque in the form of home plate was placed on the site of the original home plate of Hilltop Stadium. One of the dignitaries in attendance was Chester “Red” Hoff.

At the time of the ceremony Mr. Hoff, who was 102 years old, was the oldest living major league baseball player and New York Highlander pitcher. Mr. Hoff had taken the mound over eight decades prior to the event against the Detroit Tigers. Unbeknownst to him, Hoff was facing the famous Ty Cobb and struck him out. Hoff did not know the batter until the following day, when he read the New York Journal’s headline “Ty Cobb Struck Out.” Hoff died in September 1998 at the age of 107.

With the recent brouhaha of the possibility of the Yankees moving out of the Bronx — although many fans refuse to let the team leave the Bronx — one of the possible locations for a new stadium is in Manhattan in the west 30s. This site is also slated for a stadium for other purposes too. Many people have forgotten that the Yankees got their start in northern Manhattan at Hilltop Stadium and the Polo Grounds.

Some of the community residents have complained of automotive traffic and transit problems at game time. There has been a concern for similar problems for the projected stadium too. In 1903, the only way to get to see the ballgame in Washington Heights was by trolley, carriage or other means of transportation. When the IRT opened in October 1904, the northernmost station was at 145th Street and Broadway. The rest of the trip to the stadium was by trolley, until the IRT was extended to the Bronx in 1906.

Over the years, the Yankees and their fans have shared good times and bad. The team went through many seasons with good and bad players alike. But overall, the brief stay of the team in Washington Heights in the early days of the 20th Century left an indelible mark on the citizens of this thriving community that will never be forgotten.