Northern Manhattan and the area surrounding it is rich in a culture that has not been seen in almost 500 years. The Native Americans lived and traded in this area long before the arrival and colonization of the European settlers. 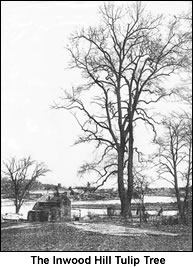 The Lenape Indians, known as the Delaware Confederacy, is one of the non-migratory groups of the Algonquin Nation that lived in what is now northern Delaware, all of New Jersey, eastern Pennsylvania, southern New York, and southwest Connecticut.

The word “Lenape” is derived from the terms “original people” or “true men.” The Algonquin-speaking peoples considered the Lenape as the original group of their nation’s spoken language. The term Delaware originates from Sir Thomas West’s title as third Lord of De La Warr. Sir Thomas was the first Royal Governor of Virginia.

The Lenape were expert botanists possessing knowledge of plants that were used for food and medicines. Many of our contemporary pharmaceuticals were derived from herbs that the Lenape and other Native American groups cultivated for their own medicinal needs. The Native Americans respected nature, and when the plants were gathered, an offering of thanks was made to the plant spirit with gifts of tobacco. They are to be considered as early conservationists and environmentalists for their own needs and beliefs.

The Wiechquaesgeck tribal group lived in northern Manhattan, all of the Bronx, most of southern Westchester south of what is now Ossining New York, and western sections of Fairfield County in Connecticut. Their main settlement was located in Dobb’s Ferry, New York. They also inhabited Fort Tryon Park until the late 17th Century when the Dutch colonists succeeded in removing them. The Wiechquaesgecks last occupied the Fort Tryon area in 1669 but did not relinquish their claims to the land until 1715. They were also known for their aggressiveness and controversial nature. The Wiechquaesgecks made many enemies, from other tribal groups of the Mohawk Nation to the Dutch settlers.

The Marechkawiek tribal group was known by other names that have been changed to be known as Reckgawawanc. Another version of the name of this tribal group comes from the name of one of its chieftains, whose name was Reckgawack and was known as Reckeweck. This group lived in what is now downtown Brooklyn, with a main settlement near the site of Borough Hall. There was another settlement in Wallabout Bay, which is now the Brooklyn Navy Yard. The Marechkawiek also held lands in the Morrisania, Spuyten Duyvil and Kingsbridge sections of the Bronx, and in Washington Heights. These lands were used mostly for trading. The only record of ownership by this tribal group was of the sale of Harlem to the Dutch.

The Nipnichsen tribal group originated from Bayonne, New Jersey, and had a fortified station for trading at Berrien’s Neck on the north shore of the Spuyten Duyvil in the Bronx. From time to time, the Marechkawiek Indians overpowered the station for their own purposes. One possible variation of their tribal name spelling was Nip Nickson. Another comes from a deed of sale of Yonkers dated 1682, which is Nippiran. Reginald Pelham Bolton brought forth another version of the name as Nipinischen. Aside from that, little is known of this tribal group.

Most traveling in Manhattan was done on well-used Indian trails. The longest of these eventually became Saint Nicholas Avenue and Broadway. These trails connected with smaller foot paths that are now located in or near Inwood Hill Park and Isham Park. These routes were mainly used to promote trade between the Native Americans and the colonists in New Amsterdam.

When settlers came to colonize the area, unparalleled suffering was brought upon the local tribal groups. Smallpox and other diseases, destruction of Native economy and ecosystem, involvement in the disputes of the settler, wars and theft of land forced the Native tribal groups to leave the area. The population of the local Lenape tribal groups was 20,000 in 1600 and had diminished to 4,000 a century later.

Today the descendants of the Lenape live in Canada, Oklahoma and Wisconsin. Presently there are at least 28,000 Native Americans living in New York City. Only a few are Lenape, who wish to keep the stories of their ancestral homeland alive.

The Lenape language is Algonquin. The three major dialects are Munsee, Unami and Unalactigo. The Munsee dialect differs from the others in that it was closely related to Mahikan (Mohawk).

The history of the Spuyten Duyvil Creek and the Harlem River Ship Canal dates back to when the city was still in Indian possession. The term we have known it as is Shorakapkok which is translated as “the sitting down place.” The Mohegan showaukuppock is translated as “cove.” The Delaware Indians call it w’shakuppek which is “smooth still water” when interpreted from their language.

Another term used by local Indians, according to Reginald Pelham Bolton, was saperewack, which meant “the glistening place.” Saperewack was located next to the Marble Hill section of Manhattan, which was severed during the construction and re-routing of the Harlem River Ship Canal.

The term paperimemin is translated from the Lenape phrase “diverting” or “turning aside.” Other translations have been “to parcel out,” “divide,” or “place where the stream is shut.” Paperimemin was an island resort located at the northernmost tip of Manhattan, which was incorporated into the Kingsbridge section of the Bronx after the completion of the canal. Reginald Pelham Bolton and William L. Calver discovered an earthen bowl on 231st Street, which is now in the possession at the Smithsonian Institution’s National Museum of the American Indian.

When the Wiechquaesgeck Indians inhabited Inwood Hill Park, they left abundant artifacts, which were found in digs made by private and city archaeologists. These finds included pottery shards, weapons, skeletons and shell and bone implements. Caves are also abundant in the park, and tours are given by the Urban Park Rangers of the New York City Department of Parks and Recreation.

In 1895 Alexander Chenoweth explored the Indian caves in Inwood Hill Park. Alanson Skinner explored and excavated the shell heap deposit and kitchenmidden in the park in 1918. Indian Road was named for a tribal settlement located in the area. Within the park near the caves is an area known as Cold Spring Hollow where Native Americans drank from a stream. The stream is barely visible today.

In the early part of the 20th Century, archaeological digs near Inwood Hill Park produced two double burial sites of the original inhabitants of the area. These skeletal remains were located near 203rd Street and Seaman Avenue. One site contained the remains of a squaw with an infant. The other contained a chief and his wife. There was a village site in the same area that was investigated by Bolton and Calver, who uncovered more human skeletal remains and those of dog and sturgeon burials.

According to local legend, the Dutch purchased Manhattan from the Indians for $24 worth of goods on November 5, 1626, near a knoll on the shore of the Spuyten Duyvil Creek. To commemorate the event, the Indians planted a tulip tree on the site that lived for 300 years. The tree, now long dead, had been replaced by a plaque honoring the location and event. Actually, the site was located in lower Manhattan. 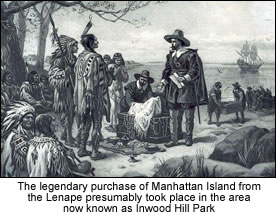 There was Indian habitation in Inwood Hill Park as late as the 1920s and 1930s. Princess Naomi, a member of the Algonquin Nation, operated a Native American store and museum in the park. There was an Indian life reservation in the park as well. There were tours of the caves, demonstrations of Native American crafts, and a library on Native American culture was made available to the public.

The area surrounding the Little Red Lighthouse was used as a settlement for trading, hunting and fishing by the local Algonquin, Mohegan and Lenape tribal groups. This was known as Penadnic or Penabnic, depending on the source of information that is researched. The Great Maze Land was bordered by 179th Street to 181st Street, Broadway to Pinehurst Avenues. During the colonial period, the presence of the Indians started to dwindle because of land being used for farms and private estates.

In 1918 shells, charcoal, arrowheads and other Native American artifacts were found by Alanson Skinner and Amos Oneroad. They were doing archaeological digs in the area for the Museum of the American Indian and the Heye Foundation. These artifacts are now in the possession of the Smithsonian Institution which operates the Museum.

Shorakapkok was home to the annual Native American Festival, which was cosponsored by the Urban Park Rangers and the Native American Heritage Committee. In 2002, a new festival format was started in Inwood Hill Park. It is now called “Drums along the Hudson.” There are Native American dances, storytelling, music, and Native American foods and crafts.