One of the most frequently used transit systems that has not been seen in over half a century were the trolley cars of New York City. These trolleys connected Washington Heights and Inwood with lower Manhattan, the Bronx and parts of lower Westchester County. 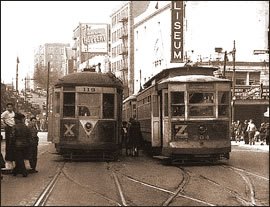 Trolley service started as horse-drawn cars in the 1850s. Many of these lines were small and slow. In 1885 cables were introduced, thus making way for faster service. The first cable-drawn car got its start on an elevated track that ran from Greenwich Street along Gansevoort Street to Ninth Avenue and Little West 12th Street. The single-columned rail supports were designed to imitate trees.

In time the cables were installed at street level and were located underground in slats between the street car tracks and were constantly moving. The grip man clamped onto these cables for motion and released to stop. The average speed was 9 miles per hour.

The cables were made of iron and hemp and were connected to pulleys along the route. Sometimes the cable strands snagged onto the grip and sent cars crashing into the cars ahead of it. Although the cables acted as traction devices, they were expensive to replace and only lasted a few months from constant use. The grips were of a design similar to the one made by Andrew Smith Hallidie, who was involved with the construction of the San Francisco cable car system.

This method was used until the late 1890s, when the cable systems became electrified. The last of these lines to be converted to electricity were in the Bronx in 1909. Companies such as J.G. Brill and Company of Philadelphia and the Saint Louis Car Company built street cars for the lines in New York. Oddly enough, when the New York City Subway opened, one of the companies to get contracts for the new system was Saint Louis, the other was Budd.

In 1854 an African American school teacher, Elizabeth Jennings, sued the Third Avenue Railway Company for having her put off one of its cars. Her lawyer, who had just been admitted to the bar, won a $250 verdict. This victory was a blow to discrimination on New York City’s public transportation system. The lawyer who had successfully defended this case was to become the 21st president of the United States, Chester A. Arthur.

During the period between 1895 and 1904, seven of the major streetcar companies in Manhattan and the Bronx were absorbed into the New York City Railway Company. After a period of receivership, the company reorganized as the Metropolitan Street Railway Company, which became a virtual monopoly in the city, controlling a network of streetcars from South Ferry to Westchester.

As a side note, the trolleys gave a baseball team its name. The Brooklyn Dodgers, organized in 1884 as an American League team, got the name Trolley Dodgers due to the vast network of streetcar lines that crossed Brooklyn. Manhattanites of the time called Brooklynites “Trolley Dodgers” because of where they lived. In 1891 the Dodgers were forced to move to Eastern Park, which was surrounded on two sides by streetcar tracks, when their home, Washington Park, had burned down.

In the late 1920s, buses started to come into their own and ran on some of the trolley routes. By the next decade, the streetcar situation had reached the point where new equipment was a necessity. The administration of Mayor LaGuardia planned to assure a modern image for the city as a whole by failing to grant renewals to the old-fashioned street car lines, which were unable to modernize.

Until this time, trolleys carried more passengers than the buses, subways and elevated lines in New York. Buses soon took over and all of the trolley routes, such as the Third Avenue line in Manhattan and the Bronx, had been converted by 1948.

In 1904, when the subway opened, there had been a peak in trolley ridership of about a billion passengers per year. In 1919 trolley tracks totaled 1,344 miles in New York City alone. Over the next few years, motor cars became prevalent, which became one of the contributing factors in the demise of the street cars.

By January 1908, the Third Avenue Railway Company controlled every trolley and cable car line and over 800 new streetcars were added to the roster, replacing the older rolling stock. In 1936 the company had many routes in Washington Heights and Inwood.

The routes ran on Amsterdam Avenue, Broadway, 145th, 181st and 207th Streets. These routes connected to Riverdale, the Fordham and Kingsbridge sections of the Bronx, and Westchester. The last trolley to run for the company was in Yonkers in 1952. Some of the cars wound up in European capitals as rolling stock for those cities’ trolley systems. 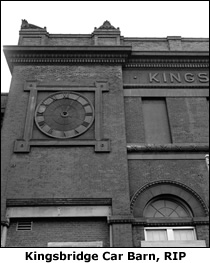 The Kingsbridge Car Barn, located on 218th Street and Broadway, which housed the street and cable cars for the railway company, was designed by Romeo Tomassek and Isaac Hopper and was completed in 1897. Its dimensions were 50 by 197 by 50 feet. Mr. Hopper was known for being involved as a contractor for Carnegie Hall. Mr. Tomassek was Chief Engineer for the company.

The front of the building was of a broad Roman Renaissance style of deep red brick and terra cotta. Included on the front were two round dials, one for a clock and the second a barometer. The basement walls were made of Inwood marble, which had come from the Spuyten Duyvil Ship Canal when it was excavated and rerouted to its present course.

The long parallel tracks were originally used for the storage and service of the trolleys and cable cars. There was a transfer turntable used for switching. The last trolley to leave the barn was in 1948. The barn was converted to a bus depot with the removal of the tracks, but the rest of the structure remained intact.

The depot was razed in 1990 to be replaced with a new facility. The structure was eligible for listing on the National Register of Historic Places as “a rare example of a large-scale 19th Century urban car barn.” During the period prior to its demolition, the New York City Landmarks Preservation Commission had not acted on the building. As a result of this, New York State could not prevent the dismantling of this historic structure.

In time many of the tracks of the former streetcar lines were paved over by the New York City Department of Highways. Sometimes these tracks had reappeared as the pavement was worn down by vehicular traffic. As recently as the late 1970s, the tracks have shown themselves on 181st Street and Broadway.

For information on street cars, trolleys, and cable cars, there are many museum sites on the Internet that have histories and photos of these gems. Here in New York City, there are several sites. One is the New York City Transit Museum. Another is NYC Subways which has information on trolleys and streetcars. In Brooklyn is the Brooklyn Historic Railway Association. There is also the Shoreline Trolley Museum and the Berkshire Scenic Railroad Museum.

I rode the 207th St. trolley many times to Fordham Rd. and beyond. It was always fun watching the cars turn around at the end of the route at 207th St. and Broadway. There has never been a smell to duplicate that from the straw seats in the trolleys, especially after a rain.

Where can I obtain information on trolley routes in Inwood and Washington Heights? There seems to be a lot written on the demise of the trolley system, but I want to know about the dates when the trolley lines were installed, and on what streets. Thank you

Does anyone know of Third avenue railway using any dining cars or dining rooms?, and if you do, what info can you find for me?

This may sound naive, but I’d like to know if immigrants in the early 1900’s traveled by trolley from Ellis Island to Manhattan or Brooklyn. This info would aid in my family history research. Thanks.

I was a bus dispatcher for Manhattan and Bronx Surface Transit Operating Authority (MABSTOA), and I was wondering if the 54th St. and 9th Ave. bus depot in Manhattan, which was razed in the early ’90s, was ever a trolley barn, and is there any particulars of note, if it was? Billy

I lived in Inwood in the 30-40-and 50s and used the Forhham broadway connection at 207th to get to school in the Bronx — there was no turntable at broadway and 207th st. The double tracks merged into a short single track to reverse the direction — it must have been hard on the operators to sit on the small round stool all day. dddev@earthlink.net

I was a bus operator for Mabsota from 1974 until 1985. The depot at 54st and 9th avenue was a trolley barn.I actually went down into the subbasement with a shifter and saw an old trolley that had been sealed over when the garage was paved. There used to be elevators that brought the streetcars upstairs for service. The 100th Street depot at Lexington, the 129th and Admsterdam. The West Farms Depot and the 146th Street Depot were all Trolley Barns.

I,ll never know how the trolly could climb the steep hill at the stop at University Hgts.-It went all the way uphill till it got to St. Tolentine—I guess they used sand as traction but it was a long uphill haul—I miss them

In regard to Stanley Lotenberg’s posting about the 54th st depot,i have a never used change pouch from that depot that I obtained at a local estate sale, in a railfans collection. What become of the trolley in the basement? Was it preserved to a museum? Does anyone know the car number? I grew up about a mile from the Kingbridge car house, spent much time hanging around it in the forties. Ihave a coin changer i bought from a supervisor there,which he had bought when he was a trolley operater in the forties. It has six barrels,they can be added and removed individually. Had a lot of transfers,but lost most of them in moving.

Addenda on 8/26 posting. The changer is a Johnson ,by Johnson farebox Co. The 54 St depot of Third Ave Railway Co was on on the west side of 10th Ave. New York Railways had a depot in the 50s on 9th Ave. Which one did Stanley Lotenberg work at? I know of no New York Railways cars surviving. I may contact some BERA persons to get more info. Thanks to all who may have info.

Trolleys of Washington Heights and Inwood