Fort Tryon Park owes a debt of gratitude to a heroine of the American Revolution. This young lady was Margaret Cochran Corbin, who is commemorated by several bronze plaques within Fort Tryon Park as well as within the community.

Margaret was born on November 12, 1751, near Chambersburg, Pennsylvania. As a result of an Indian raid in 1756, Margaret’s Father was killed, and her Mother was taken captive. Fortunately Margaret and her brother escaped the fate of her parents while they were visiting their uncle, who had adopted and raised them.

In 1772 she married John Corbin, a Virginia farmer. Three years later, John enlisted in the First Company of the Pennsylvania Artillery under the command of Captain Thomas Proctor. Margaret, who refused to be left at home, rolled up her belongings in a blanket and followed him. Margaret’s devotion to the American Cause allowed her to become a camp follower. In this position, like many other wives who came along, she was needed for cooking, washing laundry, nursed wounded soldiers and lived with the problems that had arisen in military camp life.

Margaret was given the nickname Captain Molly as was the title for other wives who were camp followers and shared similar duties. She was occasionally confused with Molly Pitcher (Mary Ludwig Hays) who was at the Battle of Monmouth in 1778.

John’s company was ordered to New York to see action. On November 16, 1776, the British and Hessians mounted a joint attack on Fort Washington in northern Manhattan. At the time of the assault, Captain Pierce, who had been in command of the Forest Hill (Fort Tryon) fortifications, ordered Corbin’s artillery to hold off the attacking Hessians with what few cannons they had.

During the four-hour battle, every hand was needed to man the cannon and muskets. Margaret helped in the laborious work of helping out where needed. Men were falling dead around the Corbins. John was killed instantly when a Hessian musket ball found its mark.

Margaret stepped into John’s place by cleaning, loading and firing the cannon with such skill and vigor that she caught the attention of the officers and men of Corbin’s company as one of the deadliest gunners who opposed the Hessians as they approached the hill. Because of her aim and accuracy, Margaret’s position drew the attention of the ten field cannons of the Hessians. This event gave her the recognition as the first woman soldier in the American Army.

In the time that had elapsed Hessian guns found their mark. The last American cannon, which was Margaret’s, was silenced. The enemy had advanced to the American ramparts. As the defenders were driven back, the dead and dying were left behind and were examined by doctors of the British and Hessian victors. To their surprise, Margaret was found alive, and her being there had excited some interest because she was the only woman there.

Margaret was severely wounded with 3 musket balls and grapeshot. Her left arm was almost severed by these wounds, her chest had been mangled and her jaw was badly lacerated. Molly was spared being bayoneted. One question that is still left unanswered is why she did not bleed to death on the battlefield or die of gangrene.

After some surgical care, Margaret and other wounded soldiers were parolled and ferried across the Hudson to Fort Lee, New Jersey. From there she and the others were transported in a straw-filled jolting cart to an army hospital in Philadelphia. Margaret never fully recovered from her wounds and was unable to use her left arm for the rest of her life.

The Philadelphia Society of Women considered erecting a monument in Margaret’s honor. When the Society met with Margaret, they were shocked to find out that she was a hard-drinking impoverished veteran and cancelled the memorial to the first woman heroine of the Battle of New York. 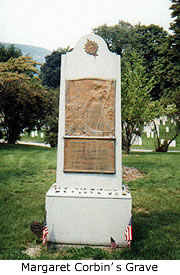 The state of Pennsylvania on June 26, 1776, gave her $30 to relieve her necessities due to her disabled condition. Margaret later received a lifetime disability pension of one-half pay on July 6, 1779, from the Continental Congress, making her the first woman to obtain such a commitment from the government.

She also received a suit of clothes and entered the Invalid Regiment at West Point. There had been correspondence between General Henry Knox and Quartermaster William Price between 1782 and 1790 indicating the fact that Margaret needed special care, being that she was unable to bathe and dress herself. This was proof that she was at West Point during this period. She had been placed in the care of a Mrs. Randall who lived in Buttermilk Falls (now known as Highland Falls).

Margaret had a lot of trouble integrating into the community. She was rebuffed by the ladies of the town because of her uncleanness and disagreeable temper. Margaret spent most her days at the post smoking her pipe and finding companionship among the soldiers.

In 1800 Margaret died just prior to her birthday and was buried in the highlands above the Hudson River. Her grave had a crude stone marker. Her life and death would have gone into oblivion but for the stories that were handed down by local villagers. The New York State Society of the Daughters of the American Revolution verified Margaret’s records that recognized her heroism and service to the United States in 1926 at the West Point Archives and through the papers of General Henry Knox. The overgrown grave was found with the help of a retired riverboat captain who claimed that his grandfather helped with the burial in 1800.

Her body was exhumed, and a West Point surgeon verified that the skeleton was that of Margaret Corbin. The verification was the result of a postmortem showing the left side of the face, left shoulder, chest and upper arm were badly battered.

The story was reported in the March 18, 1926, issue of the New York Sun. On April 14, 1926, her remains were re-interred with full military honors at the cemetery of the United States Military Academy at West Point.

In Fort Tryon Park, a plaque commemorates the Battle of Fort Washington and Margaret Corbin’s involvement. This plaque reads as follows:

In fitting tribute to Margaret Corbin, the citizens of Washington Heights and Inwood dedicated the drive within the park and the circle at the southern entrance of the park, where Fort Washington Avenue ends in her name. At the circle is a plaque that reads:

There is a third plaque in the community that honors Margaret Corbin that few people are aware of. This plaque was cast by the Daughters of the American Revolution and is within the Holyrood Church on Fort Washington Avenue and 179th Street. This plaque reads as follows: