The Little Red Lighthouse has inspired the imagination of people who have come in contact with it on their travels to the Manhattan shores of the Hudson River. The spot it stands on was known as Jeffrey’s Hook.

During the Pre-Columbian period the area surrounding the lighthouse was used as a settlement for trading, hunting and fishing by the local tribal groups of the Algonquin speaking people. During the Colonial period under the Dutch and English rule the presence of the Indians dwindled because the lands were transformed into farms and estates.

Shells, charcoal, arrowheads and other Native American artifacts were unearthed in 1918 by Alanson Skinner and Amos Oneroad while they were doing archaeological digs for the Museum of the American Indian. These are now in the possession of the Smithsonian Institution which runs the museum.

The site of the lighthouse was part of a defense perimeter for Fort Washington during the American Revolution. About 100 yards to the northeast of Jeffrey’s Hook and on top of a hill was a rifle redoubt and cannon battery. This now has a memorial erected in 1910 by the Fort Washington Chapter of the Daughters of the American Revolution. This particular chapter disbanded on October 12, 1960.

In 1889 the traffic on the Hudson River had increased to the point where lights were needed to keep the ships and barges away from the dangerous shoals of Jeffrey’s Hook. A 20-foot post with two red lanterns was erected as a warning beacon for this specific purpose. 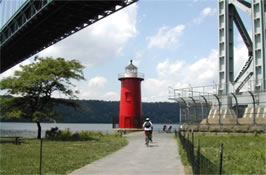 On October 10, 1921 the lighthouse was relocated and reassembled on its present location by the U. S. Coast Guard. Only the upper 40 feet of the structure was needed. The new lamp of the lighthouse was improved and had the strength of 100 candlepower and rotated every 3 seconds. The lighthouse also had a bell at the base of the tower and a fog signal was there until the late 1940’s.

When the George Washington Bridge had opened in 1931 the lighthouse was rendered obsolete. This was due to the navigation lights on top of the towers of the bridge.

In 1942 Hildegarde H. Swift and Lynd Ward published The Little Red Lighthouse and the Great Gray Bridge. This children’s book has become a classic because it gives a child’s point of view of the friendship between the bridge and the lighthouse that had developed when the lights on the bridge could not guide the river traffic during a fog. The lighthouse came to the aid of the bridge with its light and bell.

In 1947 the Coast Guard decommissioned the lighthouse and later put it up for sale as excess property. This created a public outpouring of protest. Children who read the book sent dimes, nickels and pennies from all over the country to keep the lighthouse in place. The ownership of the lighthouse was transferred to New York City Department of Parks and Recreation on July 23, 1951 and had become a fixture in Fort Washington Park.

Between 1982 and 1986 the area surrounding the lighthouse was restored with new picnic tables and a plaque describing the history of the lighthouse. This was done through the efforts of New York City Comptroller Harrison J. Goldin and Parks Commissioner Gordon Davis. The Lighthouse was given landmark status on May 14, 1991. The Urban Park Rangers give lectures and tours of the lighthouse and its immediate area several times a year.

For information on tours of the Little Red Lighthouse call the Urban Park Rangers at (212) 304-2365.