The park had been home to many people over the centuries. In pre-Columbian times, the park had been a fishing village and for trading by the Agonquin, Mohecan and Lenape groups. During the Dutch and British colonial rule the presence of the Indians had dwindled because land was being used for farms and estates.

During the American Revolution, part of the park was used as an outpost for Fort Washington. About 100 yards northeast of Jeffrey’s Hook, where the famous Little Red Lighthouse now stands, is a monument commemorating a rifle redoubt. This memorial was erected in 1910 by the Fort Washington Chapter of the Daughters of the American Revolution. This chapter was one of the four chapters to initially manage the Morris-Jumel Mansion and was disbanded on October 12, 1960.

The 19th Century brought change to the park. Ferry boats crossed the Hudson River at various points. Two of the docks for these ferry boats were located at Dyckman Street and at 152nd Street, which connected with the New York and Hudson River Railroad Company, which had service to upstate New York.

The railroad had laid tracks in the 1840s to connect New York City with points along the Hudson to Albany. The tracks ran parallel to the flood plain of the Hudson because the engines ran on steam and needed the water from the river to operate, which was the main reason for its proximity to the river. Station stops were at 152nd, 177th and Dyckman Streets.

At the 177th Street station was the West End Hotel, which gave passengers a place to stay on the Hudson. The hotel had plans to build a sister facility with views of the river. Plans were also advanced by developers for an open-air stage and comfort station in 1913. The theater was to be a reproduction of an ancient Greek theater in Taormina, Sicily. Over the years, when the threat of encroachment loomed, the neighborhood organizations of Washington Heights fought to protect the parklands.

Service continued for passenger and freight trains until the 1970s, when it became financially unfeasible to operate the line. Amtrak started rail service to Albany and other cities in New York on newly refurbished tracks on April 7, 1991. 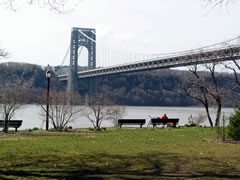 In 1894 laws were enacted to create Fort Washington Park, which now stretches from 155th Street to Dyckman Street. The City of New York acquired most of the property in five separate parcels between 1894 and 1927. At the time of the acquisitions, the Parks Department was given jurisdiction.

Along the shores of the Hudson River, the George Washington Bridge can be seen. Construction commenced in September 1927 under authorization by the New York Board of Estimate. The bridge was completed nine months ahead of schedule and opened to traffic in October 1931.

Under the bridge is the Little Red Lighthouse. Originally called the Jeffrey’s Hook Lighthouse, it was renamed for its red color. Prior to the lighthouse, a 20-foot post with two oil lanterns had been erected in 1889 as a beacon to warn ships and barges away from the shore. In 1895, stronger lights were placed for better visibility. The area was named for Captain Richard Jeffrey, who commanded various small vessels and privateers from 1744 to 1747. In 1769 Blazius Moore purchased the land to add to his holdings. In 1784 Moore gave his land to his son, Jacob, who was the owner of the Blue Bell Tavern on what is now 181st and Broadway. John Arden, a butcher from New York, owned land to the south of Jeffrey’s Hook. He is honored by having a street named for him in Inwood.

The present structure was built for the Sandy Hook Naval Station and was relocated to the park in 1921. When the lighthouse was operational, it had a hundred candlepower lamp. One candlepower is equivalent to the light emitted by one candle. The lighthouse was decommissioned in 1932 when the George Washington Bridge was opened.

One of the most impressive views of the Hudson River can be seen at Inspiration Point. This shelter located on the Henry Hudson Parkway and 190th Street was constructed in 1924 and was designed by Gustave Steinacher as a resting place for drivers and pedestrians. The Neo-Classical sitting area quickly became a favorite of Hudson River tourists.

Fort Washington will also be an inspiration for those who use it. Within the park are tennis courts, baseball fields and pedestrian walks that allow the user to enjoy a day by the Hudson River.