Washington Heights, Inwood, and Marble Hill share a common bond. In 1895, the Spuyten Duyvil Creek had been rerouted from 230th Street to 225th Street for improved navigability. 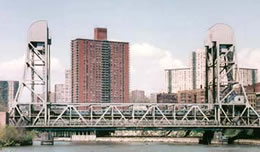 A bridge that had connected Inwood and Marble Hill has never been so intertwined in the history of the communities. This bridge created a common bond that connected Manhattan Island to its landlocked and forlorn neighborhood that is now connected to the Bronx.

It was a turntable or swing bridge design, which allowed for the flow of vehicular traffic as well as for river traffic. The recently dredged canal allowed for more boat traffic to move from the Harlem River to the Hudson River without having to sail south on the East River to the harbor.

In 1906 the IRT Subway was extended northward to 242nd Street in the Bronx. The bridge had to be replaced to handle the subway line. It was dismantled and floated down the Harlem River in three sections to 207th Street connecting the Fordham section of the Bronx with Manhattan.

The 207th Street Bridge as we know it today was reopened in 1908 as a two-laned double-decked swing bridge capable of automotive and trolley traffic. In 1949 the last trolley had gone over the bridge and into history.

Over the years, the bridge had undergone structural and roadbed construction. The bridge was widened to four vehicular lanes and two eight-foot-wide pedestrian walkways. It is 1,566 feet long and 50 feet wide. The bridge can be used by pedestrians, bikers and rollerbladers.

In 1985 the bridge was given landmark status by the Landmarks Preservation Commission. With the renovations of the bridge, one of the provisions was to meet specifications in keeping with the original ornate designs.

Meanwhile, the second bridge that bears this name, which opened in 1905, had undergone physical changes too. It was designed as a dual-deck swing span. The 1,600 ton bridge had a 266-foot-long swing span that accommodated a 35-foot-wide roadway with two pedestrian walkways on its lower deck. The upper deck had three subway tracks that were carried within three sets of dual beams.

The present structure was designed by George Ellenoff. Construction began in 1959 and was different in design from the previous bridges. The main span of the bridge is 304 feet long, 84 feet wide and has two 160-foot-high towers that raise the center span of the bridge for river traffic. The span has a roadway for 6 lanes of automotive travel and 3 tracks for the elevated subway. The cost of the original structure was $13,400,000. The total tonnage of steel used in the structure is 2,500 tons. The bridge offers a fantastic view of the ship canal and the Harlem River.

The Broadway Bridge was opened to subway traffic on December 26, 1960. Vehicular traffic was allowed to cross the bridge 18 months later. The central span was lifted for the first time in 1964 in normal operation to allow for river passage.

Both bridges are run by the New York City Department of Transportation. For more information on this and other bridges along the Harlem River, visit NYC Roads. For pictures of the replacement of the old Broadway bridge, visit William Palter’s Web site. For those who are GPS-oriented, the location of the Broadway Bridge is Latitude N 40 degrees 52.0 minutes by Longitude W 73 degrees 55.0 minutes.